Read thoughts and ideas from SCS - Simon and Neil.

According to a new report from ABI Research, demand for smart home technology is continuing to grow at a rapid pace. In 2013, the research firm said that sales of wireless embedded smart home monitoring devices, such as contact and motion sensors, smart thermostats and smart plugs, grew to 17.23 million, almost double the amount of shipments in 2012. By 2018, it is expected that more than half-a-billion wireless smart home monitoring devices will be deployed in homes around the world.

ABI said that growth will develop as new users move to use smart home systems and as users extend their existing systems. Additionally, companies like Honeywell, GE, Nest (recently acquired by Google), Kwikset, UTC, as well as many others are increasingly adding wireless connectivity to their home devices, bringing network connectivity and remote management to their offerings in order to appeal to growing numbers of smart home consumers.

According to ABI, contact sensors for detecting whether windows and doors are closed were the most popular smart home monitoring device shipped last year while motion sensors were in second place. Both devices support smart home monitoring functionality but can also be used for additional applications such as energy management.

“Combined, over 84 million contact and motion sensors will ship annually by 2018; however, it is smart plugs, smart door locks and connected smoke and CO detectors that will see the greatest shipment growth,” ABI Research Senior Analyst Adarsh Krishnan said in a statement.

The research firm said that as the market for wireless smart home devices grows, competition between wireless protocols to capture market share will also continue. ABI said the market is currently dominated by proprietary wireless protocols, but that is expected to be challenged by standards such as Wi-Fi, Bluetooth Smart and ZigBee.

Each protocol has its advantages and disadvantages and some will play more to the smart appliance rather than smart device space.  For example, Wi-Fi support in residential home-area networks and mobile devices facilitates easy network set-up without additional gateways or bridges but power demands will push adoption into appliances and devices with a fixed power supply. For its part, Bluetooth Smart support in mobile devices will also drive significant adoption in smart home devices. Even so, other protocols will continue to compete and will be supported in a range of devices from security panels to gateways and smart devices.

SCS has considerable experience in the Home Automation and Security world. These news devices are expanding what is possible and making systems more affordable. Contact SCS if you would like to learn more on the changing home automation world.

We are proud to announce and show the new Specialist Complete Security logo. 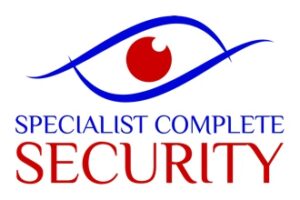 This seeing eye is an extension of the older logo that we have used for many years. Thanks to our design team for their hard work. You will see this new logo on all of our communications: E-mail, letter head, invoices, car and vans.

With a passion for customer service and attention to detail Simon and Neil continue to manage and run SCS providing security systems and associated knowledge to homes and business through London, and the Home Counties.

London and the Home Counties

For Office and for Home